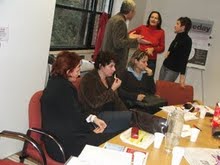 Robert Friskovec: Mediation in Prisons and Restorative Justice in the Repubic of Slovenia