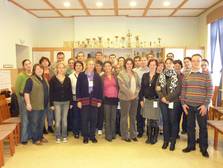 Sensitising programme for offenders in the Balassagyarmat Prison