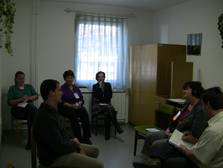 Bullying in the Juvenile Correctional Institution (Serbia) Related by the mediator