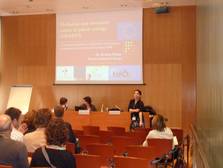 Tünde Barabás: Mediation and Restorative Justice during the execution of sentence