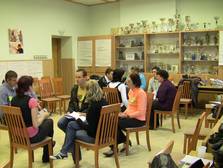 Prison-mediation training by Dr. Marian Liebmann (UK) for the prison staff of the Balassagyarmat Prison within the framework of the MEREPS project (19-21 October)